In the early 1980s, companies added networks and expanded existing networks as rapidly as new network technologies and products were introduced. By the mid-1980s, companies began to experience difficulties from all the expansions they had made. It became more difficult for networks using different specifications and implementations to communicate with one another. To address this problem, the ISO created the OSI reference model. The intention of the model was to provide vendors with a set of standards that ensure greater compatibility and interoperability between the various types of network technologies that are produced by companies around the world. The model was never actually implemented; but it is still used today as a conceptual model to provide a means of describing how data is transmitted over a network.

The OSI reference model separates network functions into seven categories, or layers, and defines the network functions that occur at each layer. Each layer provides services to the layer above it, uses services from the layer below it, and has an abstract connection to the same layer on the peer system. This modularization of function simplifies the implementation of complex network functions. And by defining these functions, the OSI model helps users understand how data from an application program travels through a network medium to an application program that is located in another computer. 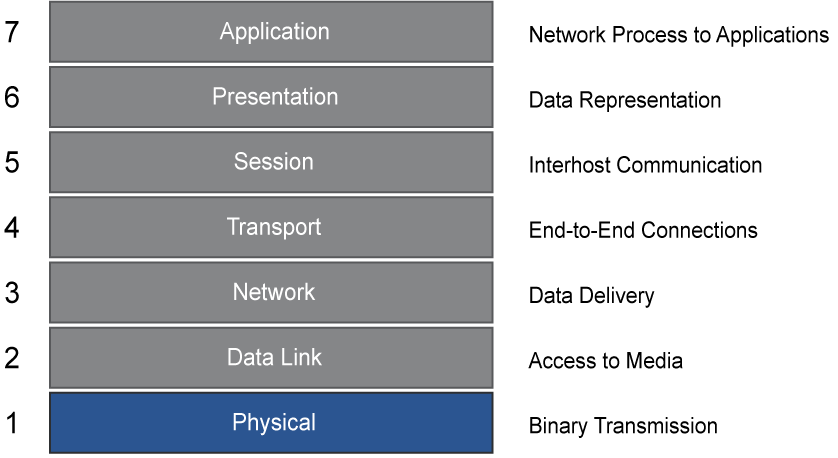 Although other models exist, most network vendors today relate their products to the OSI reference model, especially when they want to educate customers on the use of their products. The OSI model, which addresses hardware, software, and data transmission, is considered the best tool available for teaching people about sending and receiving data on a network.

In the IT industry, when a layer is referred to by number, it is normally the OSI layer, not the TCP/IP layer.

The layers of the OSI model are as follows:

Information that is to be transmitted over a network must undergo a process of conversion at both the sending end and the receiving end of the communication. That conversion process is known as encapsulation and de-encapsulation.

The information that is sent on a network is referred to as data or data packets. If one computer wants to send data to another computer, the data must first be packaged by a process called encapsulation. Encapsulation works very similarly to sending a package through a postal service. The first step is to put the contents of the package into a container. Next, you write the address of the location to which you want to send the package on the outside of the container. Then you put the addressed package into the postal service collection bin, and the package begins its route toward its destination.

Encapsulation wraps data with each network layer’s necessary protocol information before network transit. As the data moves down through the layers of the OSI reference model, each OSI layer adds a header (and a trailer, if applicable) to the data before passing it down to a lower layer. The process is illustrated in the figure below. The headers and trailers of an upper layer are not for use by the lower layers, instead they contain control information for the network devices along the way, and ultimately, the receiver. The control information ensures proper delivery of the data and to ensure that the receiver can correctly interpret the data.

When the remote device receives a sequence of bits, the physical layer at the remote device passes the bits to the data link layer for manipulation, beginning the de-encapsulation process. The de-encapsulation process is similar to that of reading the address on a package to see if it is for you, and then removing the contents of the package if it is addressed to you.

The term “decapsulation” is sometimes used in place of the term “de-encapsulation.” Both terms are acceptable.